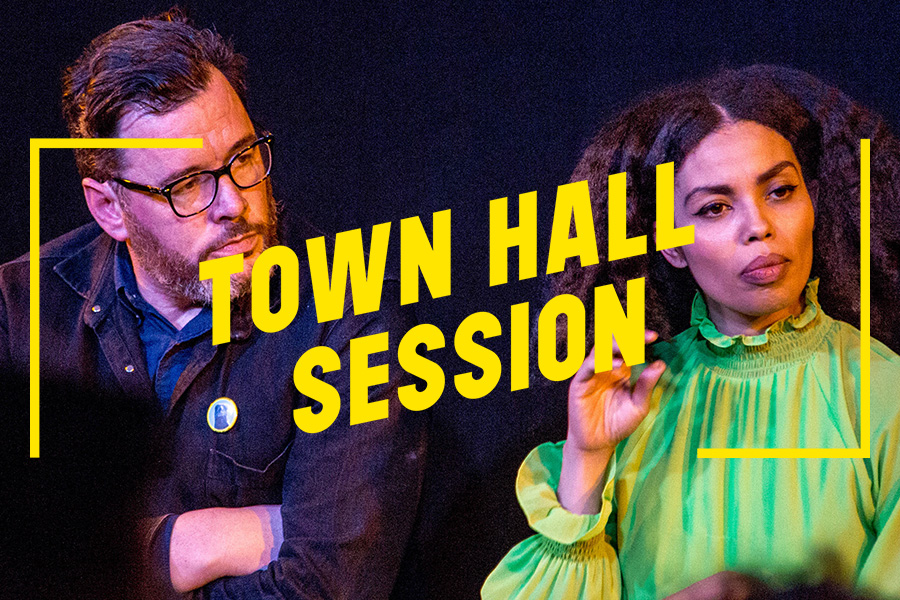 What do we need to do right now to create the future that we want and need?

Taking a cue from black feminism, which has given us by now mainstream concepts such as intersectionality and #metoo, this Town Hall Session explores futurity — the power to imagine beyond current fact and envisage that which is not, but must be.

This session will gather together not-your-usual crew of Dubliners who will make their pitch on how to liberate this city. Expect provocation, humour and stories of a Dublin you may not have seen before.

Led by Irish writer Emma Dabiri, author of the bestselling Don’t Touch My Hair — a ground-breaking study of how black hairstyling culture can be understood as an allegory for black oppression and ultimately, liberation, and Willie White, curator of Where We Live’s Town Hall Sessions in 2018.

In partnership with Dublin Theatre Festival.

Diana Bamimeke is a writer, student and independent curator from west Dublin. They are one of the co-founders of Black Pride Ireland, and have published texts in the Visual Artists Ireland News Sheet, the IMMA Magazine, and for the RHA and Temple Bar Gallery + Studios. Bamimeke is currently curating their first exhibition.

Ollie Bell is a non-binary activist from Tallaght.  They are the co-founder of Trans and Intersex Pride Dublin, which is an anti-corporate grassroots pride that seeks to build a movement for the empowerment of trans and intersex people.

Hazel Chu sits on Dublin City Council, representing Pembroke Ward, and is a member of the Green Party, of which she is its Cathaoirleach (Chairperson) and its Spokesperson on Enterprise. She was the first Irish born Chinese person elected to a political office in the Republic of Ireland. A graduate from Kings Inns and UCD Smurfit she worked in New York, Hong Kong and Sydney. In my spare time she advocates on issues of diversity and equality on various media platforms

Drogheda’s own prodigy known as Offica began his musical career in early 2018 and has been an inspiration to other drill rappers around Ireland due to his unique style of rapping, & combining of Irish and Yoruba slang within his lyrics to exhibit his culture and ethnicity.  Known as the Offica in charge of the Irish scene, he isn’t someone to compare with new school rappers, nor is he known only for drill. Offica is also renowned for trend setting dancing in his music videos, including the iconic ‘Skidi Bop’ influencing artists at home and beyond.

Azeez Saeed is an Irish based model &  DJ under the name BLKCNVS. His “blood comes from Nigeria but I grew up in Ireland”. Describing himself as an “active citizen” he came to our attention through his powerful open letters including “Letter to Versatile” and “Letter to the Young Black Gs and OGs of Ireland” addressing important community concerns.