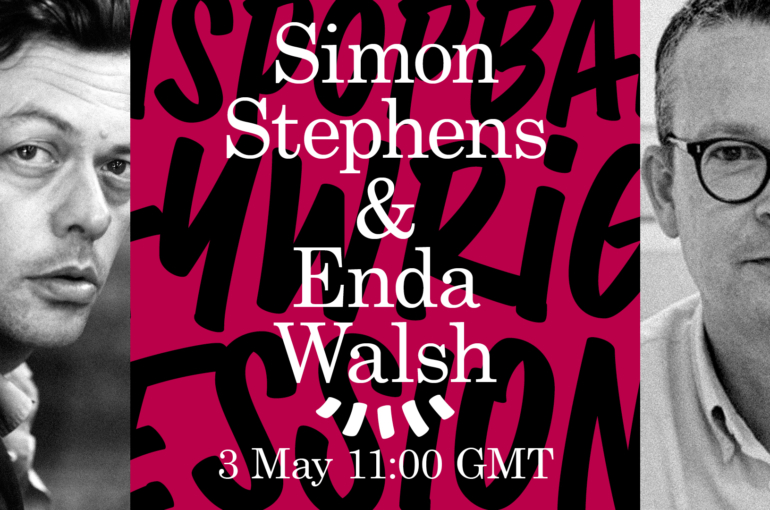 We’re delighted to announce that our next Playwright Session will take place on Tuesday 3rd May and will take the form of a conversation between playwrights Simon Stephens and Enda Walsh.

The Session will take place over Zoom at 11am GMT on Tuesday 3 May and will finish at 12.30pm GMT. The session will be hosted by playwright Phillip McMahon and facilitated by artist and arts manager, Lian Bell.

Simon Stephens is a playwright. For more than twenty years his work has been widely translated and produced throughout the world. He has won many Awards including Olivier and Tony Awards for new plays. His work ranges from the deeply political, considering such subjects such as the 7/7 London bombings (Pornography)  or the possibility of school shootings in the UK (Punk Rock) to the intimate and personal (Heisenberg, Harper Regan). His adaptation of Jose Saramago’s Blindness was made into a light and sound installation that was produced internationally during the Covid 19 pandemic. His most famous play is his adaptation of Mark Haddon’s best-selling novel, The Curious Incident of the Dog in the Night-Time.

He has written new English language versions of masterpieces by Chekhov, Ibsen and Brecht, collaborated with the world’s leading theatre practitioners (Patrice Chereau, Ivo Van Hove, Marianne Elliott, Katie Mitchell) and produced original work throughout Europe, Asia, Australia and the Americas. He is under commission to the National Theatre in the UK, the Manhattan Theatre Club, the Schauspielhaus Stuttgart and Parco, Tokyo. He has been Artistic Associate at the Lyric, Hammersmith and Associate Playwright at the Royal Court Theatre. He has taught playwriting workshops in five continents. He has presented four series of the celebrated Playwright’s Podcast from the Royal Court Theatre. He is a Professor at the Writing School of Manchester Metropolitan University.
He lives in East London with his wife, three children, their snake, gecko, three cats and a dog.

Enda Walsh is a Tony and multi award– winning Irish playwright. His work has been translated into over 20 languages and has been performed internationally since 1998. His recent plays include The Same [2017], produced by Corcadorca; Lazarus [2016] with David Bowie; Arlington [2016], Ballyturk [2014] and Misterman [2012] produced by Landmark Productions and Galway International Arts Festival; and the operas The First Child [2021], The Second Violinist [2017] and The Last Hotel [2015] produced by Landmark Productions and Irish National Opera. His other plays include Once [2011]; The New Electric Ballroom [2009], Penelope [2010] and The Walworth Farce [2006] with Druid Theatre Company; Chatroom [2005] with the National Theatre; The Small Things [2005] with Paines Plough; Bedbound [2000] with Dublin Theatre Festival; and Disco Pigs [1996] with Corcadorca. Most recently Enda wrote the book for the musical adaptation of the 2016 film Sing Street by John Carney which was due to open on Broadway in spring 2020. For the past 10 years he has been supported by, and shown work at, St. Ann’s Warehouse in New York. He has made an ongoing series of immersive theatre installations, Rooms, with Galway International Arts Festival’s Artistic Director, Paul Fahy – Room 303, A Girl’s Bedroom, Kitchen, Bathroom, Office 33A, Waiting Room, Changing Room and this year’s Bedsit. His film work includes Disco Pigs for Temple Films and Renaissance; and Hunger for Blast and FILM4; and The Last Hotel which was made into a film for Sky Arts, produced by Brink Films, Landmark Productions and Wide Open Opera. In 2014, he received an honorary doctorate from NUI Galway.