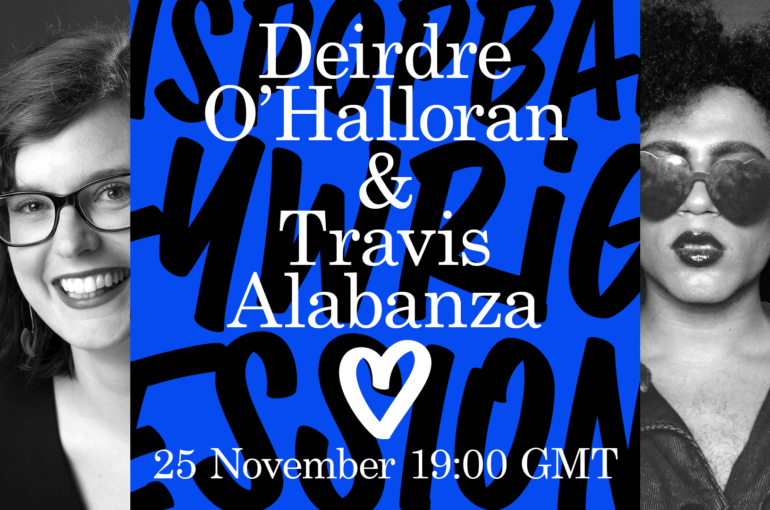 Following on from our fantastic inaugural event last month, we are delighted to continue THISISPOPBABY’s Playwright Sessions series with an in-conversation talk featuring Deirdre O’Halloran & Travis Alabanza. Deirdre O’Halloran is a dramaturg and Literary Manager at the Bush Theatre, and Travis Alabanza is a writer and performer (Burgerz, Overflow) – their route into playwriting was through live performance, clubs and ‘chatting shit online’. The Session will be hosted by playwright Phillip McMahon and facilitated by artist and arts manager, Lian Bell.

Session #2 takes place over Zoom at 7pm GMT on Thursday 25 November. The talk will last for 60 minutes including some time for some questions from the group. There will then be a further 30 minutes for the conversation to open up to the ‘floor’. The Playwright Sessions series will take many forms, including talks, masterclasses and talkshops – so each Session will have an opportunity for participants to chat and connect.

Deirdre O’Halloran is the Literary Manager at the Bush Theatre, working to identify and build relationships with new writers, commission new work and guide plays to the stage. At the Bush she’s dramaturged plays including Edinburgh First winner Baby Reindeer by Richard Gadd, Overflow by Travis Alabanza and The High Table by Temi Wilkey. Deirdre was previously Literary Associate at Soho Theatre, where she worked as a dramaturg on Girls by Theresa Ikoko and Fury by Phoebe Eclair-Powell. She led on Soho Theatre’s Writers’ Lab programme and the biennial Verity Bargate Award. As a freelancer, Deirdre is an experienced workshop leader, has worked as a dramaturg on plays including Restoration by Shaun Dunne, and has read for Sonia Friedman Productions.

Travis Alabanza is an award winning writer, performer and theatre maker. Their writing has appeared in the BBC, Guardian, Vice, Gal-Dem and previously had a fortnightly column in the metro. After being the youngest recipient of the artist in residency program at Tate Galleries, Alabanza debut show Burgerz toured internationally to sold out shows in Southbank Centre, Sao Paulo Brazil, HAU Berlin & won the Edinburgh Fringe Total Theatre award in 2019. Their writing has appeared in numerous anthologies including Black and Gay In the UK. In 2020 their recent theatre show Overflow debuted at the Bush Theatre to widespread acclaim and later streamed online in over 22 countries. Other works for theatre and live performance include Royal Court Living Newspaper, Paines Plough, Free Word Centre, Glasgow Transmission Gallery and more.  Their work surrounding gender, trans identity and race has been noted internationally, giving talks at universities including Oxford, Harvard, Bristol and more.

Noted for their distinct voice, in 2019 the Evening Standard listed them as one of the 25 most influential under 25 year olds, as well as being listed in the Dazed100, guardian asking if ‘they are the future of theatre’ and recently being listed on the Forbes 30 Under 30 List.