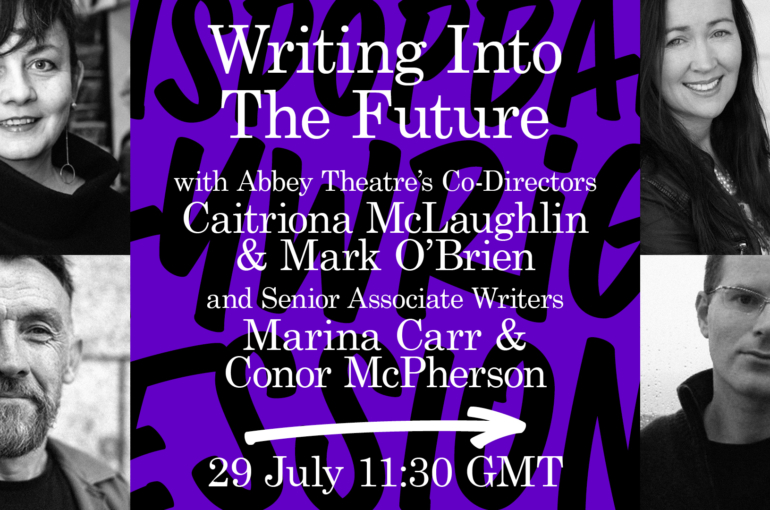 We’re delighted to announce that our next Playwright Session will take place on Friday 29 July and will take the form of a panel discussion. Writing Into The Future brings together the Abbey Theatre’s lead creative team of Caitríona McLaughlin, Mark O’Brien, Marina Carr and Conor McPherson, hosted by Siobhán Bourke.

Caitríona McLaughlin – Artistic Director, Abbey Theatre Caitríona was born in Donegal and studied science at the University of Ulster before moving into theatre. She was Associate Director at the Abbey Theatre from 2017-2020, where her productions included: The Great Hunger by Patrick Kavanagh (with Conall Morrison); Citysong by Dylan Coburn Gray (ITTA nomination Best New Play); On Raftery’s Hill by Marina Carr, (for which she won Best Director at the 2019 ITTA); and Two Pints by Roddy Doyle, which toured widely in Ireland and the USA. She also worked with theatre and opera companies on both sides of the border, including Wexford Opera, Hot for Theatre, INO, The Local Group, and Landmark, and she was the director on O’Casey in the Estate, a TV documentary shown on RTE.

Prior to moving into directing, with Patrick McCabe’s Frank Pig Says Hello at the Finborough Theatre in London in 2003, Caitríona worked as a drama facilitator in Northern Ireland, working with young people and in conflict resolution. In London, she directed numerous productions, focusing primarily on new writing, and collaborated with the Royal Court in sourcing and developing a new theatre space. She was awarded a Clore Fellowship in 2007 and subsequently spent six summers with LAByrinth Theatre Company in New York developing new plays for Artistic Directors John Ortiz and the late Philip Seymour Hoffman, at their Summer Intensive. During this time Caitríona also directed a number of plays in New York including Killers and other Family (part of the OBIE award-winning Hilltown Plays) and plays at Atlantic Theatre, Rattlestick, and Bard Summerscape.

Mark O’Brien – Executive Director, Abbey Theatre From Bray, Co Wicklow, Mark studied at University College Dublin, graduating with a Master’s degree in English Literature.  He has had over 25 years’ experience in the theatre and wider culture sectors, as a leader, facilitator, actor, sound designer, administrator, and theatre director. He has also led, directed, and developed work in the youth theatre sector, and with Team Educational Theatre Company.

Mark was previously Director of axis arts centre Ballymun. Over ten years, he developed axis into an organisation and space of local, national and international renown, that created, facilitated and produced new and significant work, across theatre, arts development and engagement contexts. Mark led the organisation through two years of mentorship on the New Stream programme with the Devos Institute, at the University of Maryland and Business to Arts and completed a postgraduate diploma in Innovation and Social Enterprise at the Ryan Academy. Under his leadership, axis became an artistic and cultural hub for both artist and public, saw a 100% increase in gross box office, developing new income streams, a building expansion, and a new operational model, all while instilling a developmental and supportive ethos with the over 35 full / part-time staff, and many artists / collaborators. His driving force was to achieve a shared vision of excellence through inclusion.

Conor McPherson is a playwright and screenwriter who was named by The New York Times as ‘the finest playwright of his generation’.

In 2011 he wrote and directed The Veil for the National Theatre and in 2012 he adapted Strindberg’s The Dance of Death for the Donmar Trafalgar Season. The Night Alive premièred at the Donmar in June 2013 and transferred to the Atlantic Theater in New York in November 2013.

Conor also writes for film and in 2008 he began production on The Eclipse, which marked his debut as a screen director. The Eclipse was adapted by Conor from a ghost story by Billy Roche and stars Aidan Quinn and Ciaran Hinds.  He also developed Strangers for Number 9 Films based on the novel by Taichi Yamada.

Conor is currently working on the screenplay Double Cross for Paul Greengrass. His original television drama Paula, developed with Cuba Pictures and BBC NI for BBC2, aired in May 2017 to brilliant reviews. The Girl from the North Country, with music from Bob Dylan, had its world premiere at the Old Vic theatre in 2017, transferred to the West End in 2018 and arrived on Broadway in 2020.

Conor currently has several projects in development, including a film adaptation of Girl From The North Country with Blueprint Pictures/New Regency.

Her work has been produced by The Abbey Theatre, The Gate, Druid,
Landmark, The Royal Court, Wyndhams Theatre, The RSC, The Tricycle, The
MacCarter Theatre, San Diego Rep, Milwaukee Rep. She is translated into many languages and produced around the world. She also wrote a new, contemporary translation of Rigoletto for Opera Theatre Company, which toured Ireland in 2015, and wrote an original oratorio Mary Gordon as part of a commission for Wicklow County Council that brought together choirs from throughout County Wicklow with solo singers and the RTÉ National Symphony Orchestra in November 2016.
Prizes include Windham-Campbell Prize 2017 for her body of work, The
Susan Smith Blackburn Prize, The American/Ireland Fun Award, The E.M Forster Award from the American Academy of Arts and Letters, The Macaulay Fellowship, The Puterbaugh Fellowship. She is a member of Aosdana.
She has taught at Trinity, at Villanova, at Princeton. Currently she lectures in the English department at Dublin city University. She is published by The Gallery Press, Nick Hern Books and Faber & Faber.