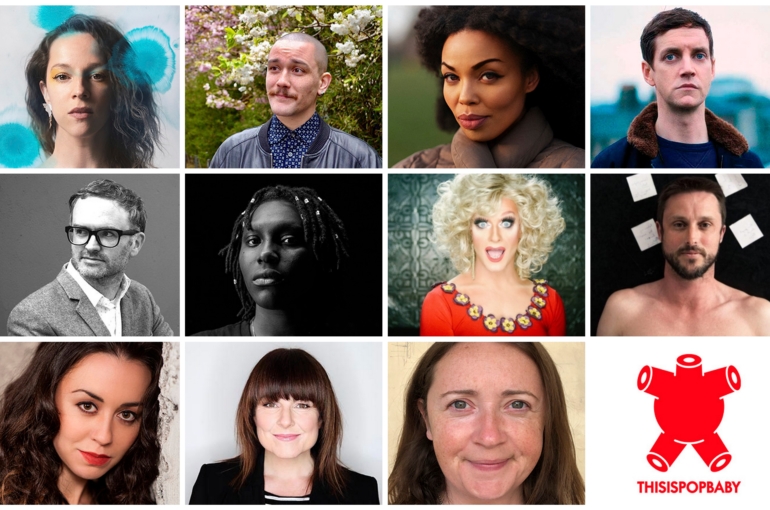 THISISPOPBABY emerges from the uncertainty of the pandemic strong, and as such, our family of artists is growing.
We’re thrilled to announce our 2021/2022 Associate Artists Programme, supported by The Arts Council and in partnership with Project Arts Centre. The inaugural year-long programme encompasses both artists currently under commission with the company and artists who have been invited to explore new ideas via the programme. As well as being supported to develop their own ideas, this group of incredible artists will form a cultural think tank via a buoyant and spicy yearlong dialogue with each other and THISISPOPBABY, challenging thinking around art, theatre and the changing city.

THISISPOPBABY develops and presents world class theatre from Ireland’s most exciting theatre artists. Recent highlights include Mark O’Halloran’s Conversations After Sex, and the worldwide smash, RIOT.
In addition to our own productions, THISISPOPBABY has a long history of commissioning, developing and presenting new work by emerging and established artists, most notably via our Queer Notions Festival, our POPTENT at Electric Picnic, our Where We Live Festival and our performance art club WERK. Over the years we have supported new work from artists such as Clare Dunne, Una McKevitt, Wayne Jordan, Thommas Kane Byrne, Rosaleen McDonagh, MALAPROP Theatre, Veronica Dyas, Federico Julian Gonzalez & Janet Moran, Fionnuala Gygax & Dan Colley, and Tara Brandel & Nicholas Nwosu.

THISISPOPBABY continues to be a leader in the arts, and with our Associate Artists, we continue to create programmes and platforms to support our fellow artists and help shape the theatre ecology in Ireland.