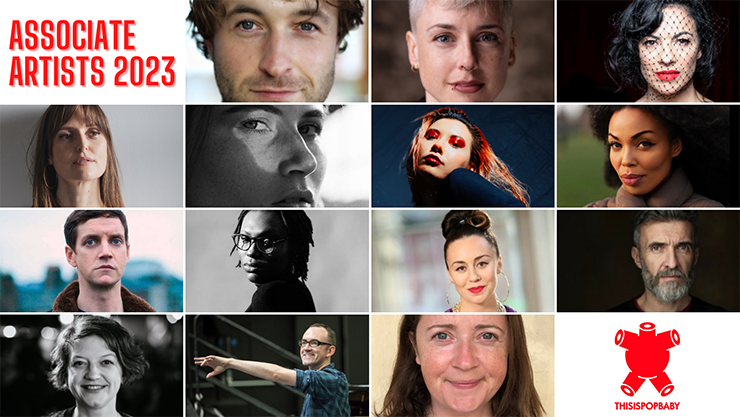 Announcing our Associate Artists for 2023

THISISPOPBABY has emerged from the uncertainty of the pandemic strong, and as such, our family of artists is growing.

We’re thrilled to announce our 2023 Associate Artists Programme, supported by The Arts Council and in partnership with Project Arts Centre. The second year of this programme encompasses both artists currently under commission with the company and artists who have been invited to explore new ideas via the programme. As well as being supported to develop their own ideas, this group of incredible artists will form a cultural think tank via a buoyant and spicy yearlong dialogue with each other and THISISPOPBABY, challenging thinking around art, theatre and the changing city.

In addition to our own productions, THISISPOPBABY has a long history of commissioning, developing and presenting new work by emerging and established artists, most notably via our Queer Notions Festival, our POPTENT at Electric Picnic, our Where We Live Festival and our performance art club WERK. Over the years we have supported new work from artists such as Clare Dunne, Una McKevitt, Wayne Jordan, Thommas Kane Byrne, Rosaleen McDonagh, MALAPROP Theatre, Veronica Dyas, Federico Julian Gonzalez & Janet Moran, Fionnuala Gygax & Dan Colley, and Tara Brandel & Nicholas Nwosu.

THISISPOPBABY continues to be a leader in the arts, and with our Associate Artists, we continue to create programmes and platforms to support our fellow artists and help shape the theatre ecology in Ireland.

Adam is a theatre artist, singer, performer and composer making work in Dublin. He is front man with art music outfit, Phoeno, wherein he has composed and created a suite of songs that look at masculinity, mental health and Dublin as a character.
He co-created and produced a number of art music films in collaboration with director Luca Truffarrelli and choreographer Philip Connaughton.

Aisling Ní Cheallaigh is an Irish aerialist who delights in flight and movement. She specialises in Aerial Hoop but is also an expert dabbler in Straps, Fabric,  Doubles Trapeze, Hand-to-Hand acrobatics and the serious discipline of being hit in the face with a Cyr Wheel. She has co-produced and created three of her own works, two with Ronan Brady (How to Square A Circle and Sub Rosa) and one with Jenny Tufts (NASC). She is free range, organic and cornfed.

Camille O’Sullivan is a singer/actress who enjoys an international reputation for her interpretations of the songs of Nick Cave, Brel, Waits, Bowie, Radiohead and more. Her headline gigs include Royal Festival Hall, Sydney Opera House, The Apollo, The Roundhouse, Barbican, Kennedy Centre, National Concert Hall with the Symphony Orchestra and she appeared on Later with Jools Holland (BBC) where she was voted “One of the top 25 performances in the history of the programme” by the Daily Telegraph.

Clare Dunne wrote and starred in  - a spoken word and singing odyssey – SURE LOOK IT FUCK IT,  produced by THISISPOPBABY and directed by Tom Creed, which sold out in Project Arts Centre in 2019.  She has also been on numerous stages across the world in companies like Druid, Abbey Theatre, St Anne’s Warehouse NY, Donmar Warehouse, The NT London. Winner of IFTA 2021 for Best Script – Film  2021 with Malcolm Campbell, and chosen as one of Variety’s Top Ten Screenwriters to watch in 2020,  Clare’s first feature script ‘Herself  premiered to rave reviews at the Sundance Film Festival and released on many streaming platforms.

Ellen is a production and costume designer working across theatre and film. Some recent work includes Balor Hall by Rioghnach Ní Ghrioghair for RTÉ Storyland, The Boy Who Never Was and  Masterclass by Brokentalkers, G.O.D. by Lee Coffey,  Party Scene by Phillip McMahon and Philip Connaughton. She is co-founder of theatre collective Murmuration. She has designed for music artists, in particular Soft Boy Records and Kojaque. She was nominated for a DIFF Aer Lingus Discovery Award this year for her work in production design for film.

Emer is a high-energy London-Irish eejit hailed a ‘Dietrich – esque cabaret star’ by The Stage. Multidisciplinary performer and musical artist, she specialises in musical comedy, cabaret, theatre, live music and drag. Emer is from Cork and was the 2022 recipient of the prestigious Jane Anne Rothwell Award, in the same year she was nominated Best Performer at the Dublin Fringe Festival for her performance in THISPOPBABY’s trailblazing show WAKE.  Since graduating from the Royal Central School of Speech and Drama, her diverse career has found her working with the RSC and National Theatre and singing to the masses at Glastonbury Festival, O2 arena and Royal Albert Hall.

Emma Dabiri is an Irish-Nigerian author, academic, and broadcaster. Her debut book, Don’t Touch My Hair, was first published in 2019. She studied African Studies in London, her academic career leading to broadcast work, including hosting BBC Four’s Britain’s Lost Masterpieces and Channel 4 documentaries such as Is Love Racist?, among others. Dabiri lives is a teaching fellow in the Africa Department at the School of Oriental and African Studies in London and is currently completing her PhD. Her most recent book, What White People Can Do Next, was published in 2021 to widespread critical acclaim.

Emmet Kirwan is an award-winning actor, playwright and poet from Tallaght, Dublin. As a writer, Emmet’s play Dublin Oldschool won the Stewart Parker Trust Award. Emmet wrote four poetry sections for THISISPOPBABY’s RIOT. One of the poems, ‘Heartbreak’, was adapted into an IFTA-winning short film. Other writing includes Queen of the Pyramids (Landmark Productions and Octopus Theatricals); Sarah and Steve (RTÉ and Accomplice); and Outside (Still Films). His debut novel will be published by Harper Collins in 2023.

FELISPEAKS is a Nigerian-Irish Poet, Performer, Playwright from Co. Longford. FELISPEAKS has been nominated Best Performer by Dublin Fringe Festival Sep. 2018 Judged for her performance in ‘BOYCHILD, a co-written play by Dagogo Hart and herself, and won Best Performer at Dublin Fringe 2022 for her performance in THISISPOPBABY’s WAKE. As well as being a Member of the Poetry Ireland Board of Directors, Felicia is a member of the Poetry Collective, WeAreGriot. FELISPEAKS’ poem: ‘For Our Mothers’ is in the Ordinary Level English Leaving Cert Curriculum for the year of examination 2023.

Kate is an actor, writer and singer/songwriter from Dublin. In 2021 she made her directorial debut with short film with CHERRY (Official Selection Galway Film Fleadh 2021). Kate’s theatre work includes Conversations After Sex (THISISPOPBABY), her self-penned show WALK FOR ME (Project Arts Centre),  RIOT (THISISPOPBABY), SHIT (THISISPOPBABY). Film/TV includes KIN (Townsend Film/AMC), Fair City (RTÉ), The Tudors (HBO). Kate makes music under the name “MissKate”. She has directed her last three music videos, TOOK THE LIFE, GET ME and a collaboration with Lux Alma, IN THE PLACE released in October 2021.

Mark O’Halloran is a writer/ actor from Ennis, Co. Clare.  He has worked with many of the major theatre companies in Ireland. On screen he has appeared in numerous films, most notably as one of the eponymous heroes in ADAM & PAUL (which he also wrote), and the lead role of MP in History’s Future directed by Fiona Tan. Most recently he appeared in Shane Meadow’s Channel 4 drama, The Virtues, for which he won Best Supporting Actor at the IFTA awards 2020. He will be appearing in upcoming feature, The Miracle Club, alongside Maggie Smith, Kathy Bates, and Laura Linney.

SJ was first introduced to the idea of lighting design in Dublin Youth Theatre at the age of 14. She completed a degree in Drama and Theatre Studies in Trinity College in 2006, and participated in Rough Magic Seeds programme in 2006/2008. It was from this programme that she and Sophie Motley started WillFredd Theatre, with which they created 7 original productions rooted in community engagement from 2010 to 2017. In 2015 she helped found the Irish Society of Stage and Screen Designers, with whom she represented Ireland in the Prague Quadrennial of Performance Design and Space in 2019. In 2021, she completed a Masters in Interactive Digital Media from Trinity College. In addition to working as a lighting designer, Shiels is now pursuing her interests in interactive digital/analogue media work. One of SJ’s first professional lighting design jobs was with THISISPOPBABY on Danny and Chantelle, Still Here in 2006. She is honoured to continue to work with them as an associate artist in 2023.

Tom is a theatre and opera director. His productions have been seen at all the major Irish theatres and festivals, and in over thirty cities on three continents. With THISISPOPBABY he has directed Conversations After Sex,  Sure Look It, Fuck It,  I Am Tonie Walsh, Trade, and  All Over Town (with Calippo Theatre Company).

Una Mullally is a writer and doer from Dublin. She writes books, articles, columns, poems, screenplays, essays and more. She has co-created podcasts, a music documentary film festival, a spoken word company, a DIY journalism school, club nights, a music TV show, documentaries, and parties. She strives for utopia.